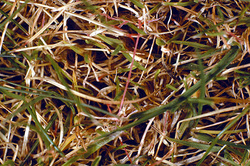 Red thread is one of the most common fungal patch diseases found on lawns, particularly where the turf is deficient in nitrogen or has a high thatch build up. It causes brown patches of turf, especially during a wet summer.

What is red thread?
Red thread is a common cause of patches of dead grass on lawns during wet summers and in autumn. It is caused by the fungus Laetisaria fuciformis. Red thread will rarely kill the grass completely, and the patches will recover with appropriate remedial action. The disease can develop at any time of year, but is most common in late summer and autumn.

Symptoms
You may see the following symptoms:

Two types of fungal growth may be seen on the patches, particularly under wet or humid conditions. Both are visible to the naked eye, but are seen better with a hand lens or magnifying glass.

Non-chemical control
If red thread appears, application of nitrogen to the affected area will often be sufficient to control it. Nitrogen is best given as sulphate of ammonia at 15g per sq m (½oz per sq yd). Do not apply after August to avoid the production of soft growth which is prone to snow mould.

The threat from red thread can be reduced by taking action to improve the drainage and aeration of the turf. Scarifying the turf with a lawn rake or electric scarifier will remove thatch and moss and increase aeration. Poor drainage and compacted areas can be alleviated by forking or by the use of a solid-tine or hollow-tine aerator. Ensure that the soil is not deficient in nitrogen. Disposing of grass cuttings will reduce the amount of fungus present to re-infect the lawn.

Chemical control
The only fungicide available to amateur gardeners for control of red thread is trifloxystrobin (Bayer Garden Lawn Disease Control). The fungicide can be used all year round except during drought conditions or when the lawn is frozen. There is a risk of resistance occurring in the fungal population therefore the product should not be applied more than twice a year and is best used in conjunction with other control methods.

We are happy to look at your lawn free of charge and advise you on the best treatment as we have access to products that are not available to the general public.

Biology
The thread-like structures (stromata) can survive on leaf debris and in the soil for up to two years. Spread of the disease can occur by airborne or waterborne spores, or on contaminated tools or shoes. Prolonged leaf wetness is required for infection, so red thread is most likely to be a problem in wet summers and during heavy dews in autumn.

Red thread typically develops on turf which is poorly aerated and deficient in nitrogen. Even if nitrogen is applied, heavy rain may wash it down below the root zone of the turf, especially on light soils.

The fungus does not affect the root system of the grass and recovery may occur after a few days or a few weeks, even without remedial action. Persistent patches may require specific attention.